Millbury National Bank was founded in 1825, and through fiscal integrity and fortitude, the bank has been led by a committed Board of Directors for over 190 years, currently with several multi-generational Directors. Our focus is on serving small businesses within the Blackstone Valley, and maintaining our strong commitment to our customers, stockholders, employees and community. We treat each customer like family by offering them a level of customer service that is second to none in the industry.

Small town financial institutions have always been at the forefront of our country’s success, even dating back to the turn of the 19th century. Small banks, such as Millbury National Bank, have helped fuel the Industrial Revolution, endured through the Great Depression and continue to thrive and serve small communities throughout the Blackstone Valley.

In the early 1800’s, when the Industrial Revolution was really taking off throughout the Blackstone Valley, a family owned armory was just picking up steam. Built by Asa Waters II and brother, Elijah Waters, the family began to revolutionize how guns were made for that time period in a small mill adjacent to the Blackstone River. During that time, their gunsmithing included many technological advances that were perceived as ahead of their time, which led to a more reliable and more accurate firearm. Due to their growing success, the armory actually received their first contract to manufacture guns from the United States government in 1808 (Blankenheim, 26).

While the company and the brothers gained wealth, they realized that a local bank was needed to help with the growth of the business, as well as other mills throughout Millbury and the surrounding areas. In 1825, the same year that John Quincy Adams was elected as our nation’s sixth President, Millbury Bank (now named Millbury National Bank) opened its doors, after receiving approximately $100,000 from 73 local business owners to purchase stock in the bank. Asa Waters II would later become the bank’s first president. Even back in the mid-1800’s, Millbury National Bank would not be immune from the lures of investors. In 1852, as the bank continued to have success over the years and moved locations several times to accommodate their growth, they learned that a group of New York capitalists would try to oust the Board of Directors to take over Millbury National. As a testament to their staying power, this takeover was averted and continued their banking prowess. 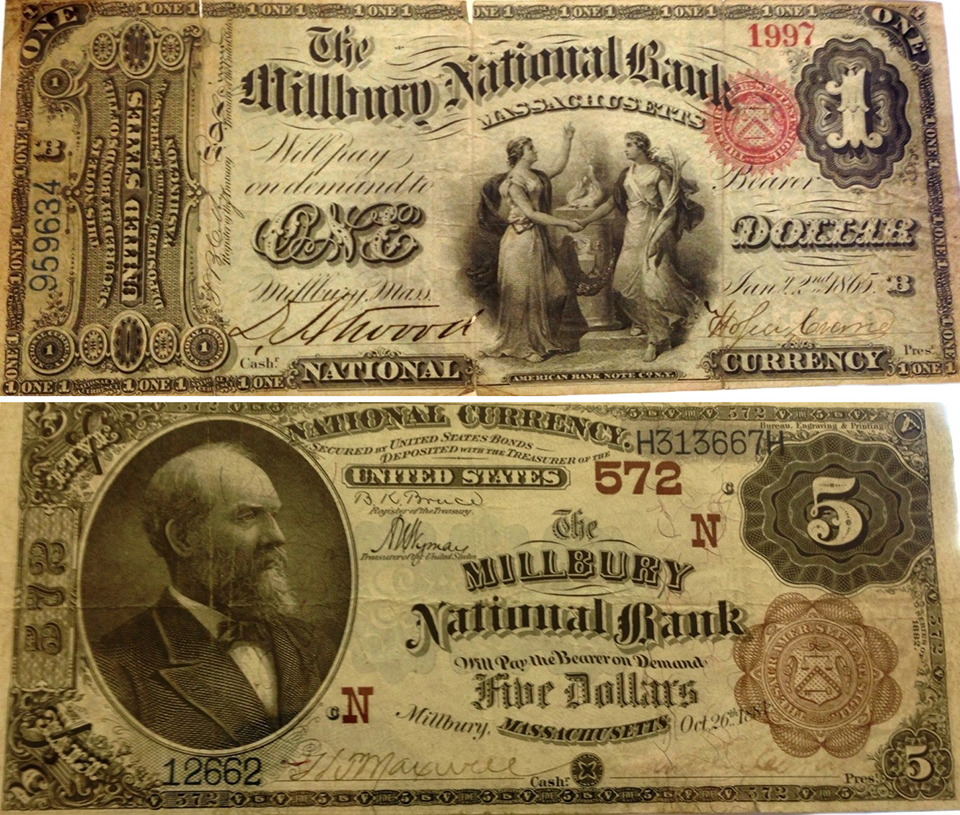 Millbury National Bank printed $2,258,660 in national currency between 1864 and 1933. Before national currencies and efficient clearinghouses, banknotes were only redeemable at face value at the issuing bank. Even a branch could discount notes of other branches of the same bank. The discounts usually increased with distance from the issuing bank. The discount also depended on the perceived safety of the bank. When banks failed, the notes were usually partly redeemed out of reserves, but sometimes became worthless. 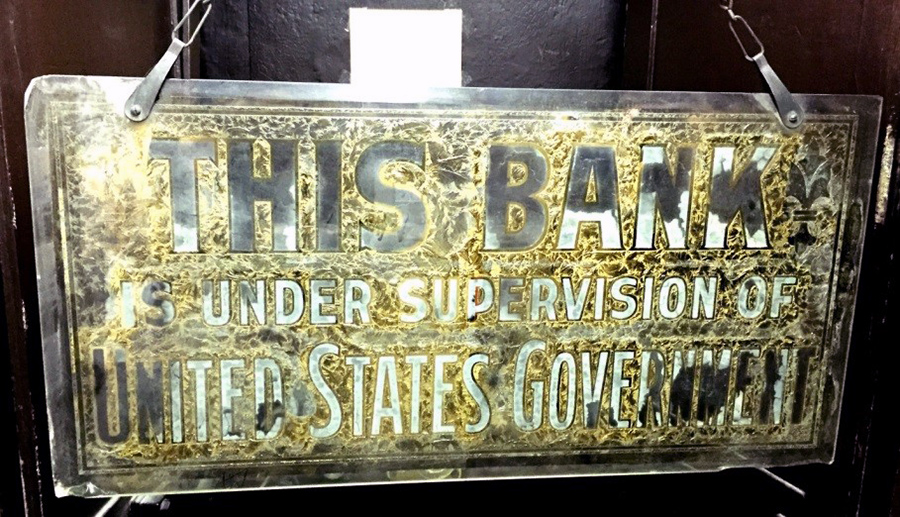 Investors were brought in during the Great Depression in 1933 to help save the Bank by restructuring according to the Banking Act of 1933. As a result of this act, on January 1, 1934 Millbury National Bank provided FDIC Insurance for the first time. The name was changed from “Millbury Bank” to “Millbury National Bank." The two most prominent multi-generational leaders of the bank came out of this reorganization, the Harris and Matson families, who are still active in the bank today.

The bank’s current President, Kate, is a third generation President. Her grandfather, E. Paul Harris, was President from 1939 to 1971, when her father, Roger Corey, took over through 1995. In 2002, Kate became President. The bank has had two previous multi-generational Presidents starting with the very first President, Asa Waters in 1825 to 1829, and his son, Col. Asa H. Waters from 1840 to 1843. Also, the Honorable Samuel E. Hull was President from 1899 to 1911, and his son, Edward Hull was President from 1922 to 1926. The bank also had a pair of siblings as Presidents with Jonathan Warren from 1860 to 1863 and Horace S. Warren from 1896 to 1899. The commitment to community of this bank has been handed down from generation to generation throughout its history.

MNB Throughout the Years 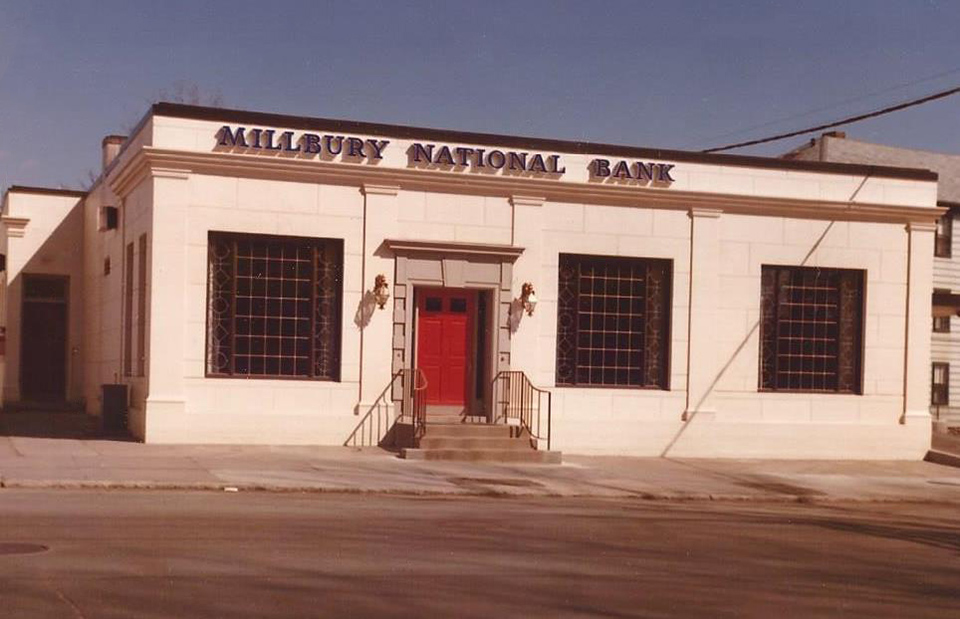 Through the efforts and influence of a number of prominent citizens The Millbury Bank was established. The Massachusetts Legislature approved the act in June of 1825. Asa Waters II was chosen as the first president and a banking room was established in the Farnsworth Block, located on Elm Street in Millbury.

The bank was moved to the Millbury Savings Bank Building across the street from the Farnsworth building occupying one side of the bank room.

The Statement of Condition showed that the bank continued to be a sound financial institution, which stood among the best in the state.

Millbury National Bank moved to its new quarters at 18 Main Street. Two additions have been made since then to handle the expanding operation.

The bank opened a branch at 215 Worcester Street in North Grafton in December of 1995.

The bank relocated the North Grafton branch to South Grafton in November 2010 to better serve the Blackstone Valley Communities.

Millbury National Bank  launched online account opening and is growing their online presence. We continue to grow and serve the Blackstone Community. We have been helping businesses grow and prosper in the Valley for the last 193+ years.

For those financial matters that are too important to handle over the phone.

From questions about accounts to ways we can improve, we're always happy to help.